“I love knowing for a moment that I’m objectively better than someone else. I spend so much time comparing myself to other people … even if it’s at this weird archaic sport. Maybe that’s why sports exist?” says Athena early in the play named after her. It’s a brilliant line that frames some of the deepest questions surrounding the sport of fencing, and perhaps all sports. What does it mean to win, to truly win? And is winning a product of the mind, of the body, or of both in tandem? And in what proportion? 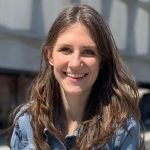 I’m Sarah Fox and I’ll be blogging about Thrown Stone’s 2022 #GirlPower Season. You may know me as the Music Director of Jesse Lee Church, but I also have a background in historical research and analysis, particularly focusing on human rights issues. I grew up in Kentucky and enjoyed playing basketball and volleyball particularly in high school. While I know it’s nothing like fencing (and I saved most of my competitive spirit for musical theatre auditions and band camp) I know that any activity deemed “extracurricular” can sit at the crux of a high-school life—defining and shaping a student’s world in profound ways.

One of the strengths of Athena is that playwright Gracie Gardner writes it in such a way that the sport of fencing almost becomes a character itself. Fencing is a sport of skill, speed, and wit—from which it derives its nickname of “physical chess.” At its core, players score points for touching their opponent with the tip of their weapon within the confines of the rules. Perhaps a metaphor for life? What are the rules? Are they fixed or can they be bent—especially when an error in a match can become the winning point of next seasons’ game.

Amidst the slashing of blades and the rough-and-tumble of fencing practice, two sparring partners form a relationship that sometimes resembles friendship, sometimes rivalry. They ask—what is women’s place in fencing? Not even the suits are made to fit boobs properly, as Athena points out. An interesting point for a play taking place in 2022. Fencing was one of the five sports featured in all modern Olympic games, but it wasn’t until 1924 that women were allowed to participate. Furthermore, various forms of fencing (such as the sabre) were not open to women in the Olympics until 2004. A character in the play aptly jokes that women can’t be engraved on fencing trophies because the “technology doesn’t exist.”

A few facts about Junior Olympic fencing—the Junior Olympics of fencing is not an event linked to the Summer or Winter Olympics, but rather a national event (that takes place over President’s Day Weekend each year) which qualifies fencers for Junior and Cadet World Championships. The number of points required to qualify changes slightly every year, depending on statistics and participants. Of course, making it to this level of national and international challenge is an impressive and laudable achievement.

At Way of the Sword in Ridgefield, CT—those interested can learn the arts of fencing, archery, and chess. Way of the Sword states their core values as “honesty, humility, integrity, trust and raw perseverance,” values also clearly demonstrated in Athena.  The owner, Michael Martin, says Way of the Sword trains an average of 60-70 fencers every year, from beginner to world-cup level at their facility at 21 Governor Street, where they’ve been located for the past five years.

Yet of course Athena portrays the life of women’s junior fencing as much more than just life on the salle (fencing arena). For these junior fencers, future plans and scholarships are the underlying motivations for winning a trophy. As any real-life fencer would surely vouch—the dynamics of fencing practice mirror the dynamics of the world. And as one character reminds us, it isn’t always fun—“this sport doesn’t feel good—you get stabbed.”

This quick-witted, charming, and refreshingly female-focused play cuts to the quick and is sure to leave you with more questions than answers. I think that’s a good thing.

This site uses Akismet to reduce spam. Learn how your comment data is processed.